‘Is St. Patrick’s Day in Dublin all it’s cracked up to be? We’re thinking about visiting for March 17th, but we’re still not sure!’

We get emails like this every single year. To be blunt, for most adults living in County Dublin for a long period, St. Patrick’s Day isn’t something generally celebrated.

However, for many (usually those visiting, those with kids and new arrivals living in the city), spending St. Patrick’s Day in Dublin in can be a big deal.

Below, I’ll give you a very honest insight into what to expect, with info on the good, the bad and the downright ugly (and the St. Patrick’s Day Parade, of course!).

Some quick need-to-knows about St. Patrick’s Day in Dublin 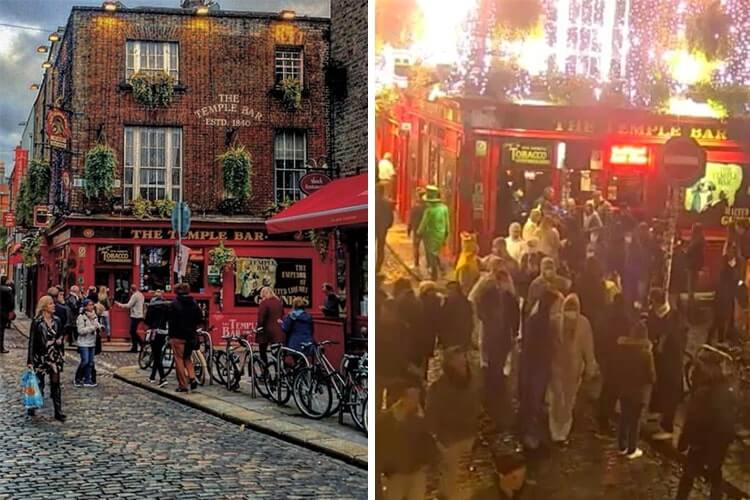 So, if you’re debating celebrating St. Patrick’s Day in Dublin, and it’s your first visit to the capital, take a minute to read the below, first, as it’ll be you up-to-speed.

March 17 is a big day on the Irish calendar. The main event is the massive parade through the Irish capital. Streets are closed to traffic to allow this exciting and colourful annual parade to take over the city streets. Starting on Parnell Square, it moves down O’Connell Street, over the bridge, down Dame Street, Nicolas, Park and Wexford Streets before ending at St Stephen’s Green.

Celebrating Ireland’s patron saint, this annual event attracts thousands of visitors. Streets start filling up from 9am so you need to arrive early to secure a reasonably good viewing spot of the passing parade.

3. A lot of people avoid the city

Take a tip from a local. Dublin is mental busy on Paddy’s Day and many locals actually prefer to dodge the city altogether during the parade. This doesn’t mean it’s quiet – the city is still buzzing in the touristy spots, like Temple Bar.

4. Most people avoid it altogether, as it gets messy

Some tourists and many locals tend to avoid Dublin altogether which is a shame. However, some people like to overindulge and it can end up being less of a party. The streets can get rowdy with inebriated revelers, so you need to stay sharp, or stay home.

Heading to Temple Bar doesn’t get you away from the mess as crowds flock to this historic area. It’s crazy busy, becomes rather messy, and worst of all, it’s near impossible to get a drink. However, we’ll recommend some good places to hang out as a much more enjoyable alternative.

6. Keep your wits about you

If you’re visiting the St. Patrick’s Day Parade in Dublin, be vigilant and make sure to watch out for pick-pockets. If you’re planning on having a late night, also keep your wits about you. St. Patrick’s Day is notorious for heavy drinking, which often results in fights (and usually when all of the pubs/nightclubs chuck out).

Worthwhile things to do in Dublin on St. Patrick’s Day (if you want to dodge the parade)

So, if you’re spending St. Patrick’s Day in Dublin and you’re looking to avoid the mayhem, while also having a great day, we’ve some suggestions for you.

Now, the mini-itinerary below is very un-st-patricky (is that even a phrase?!), but you can polish off your day with a trad session in one of the many pubs in Dublin with live music, if you like.

1. Kick-start your day early with a ramble 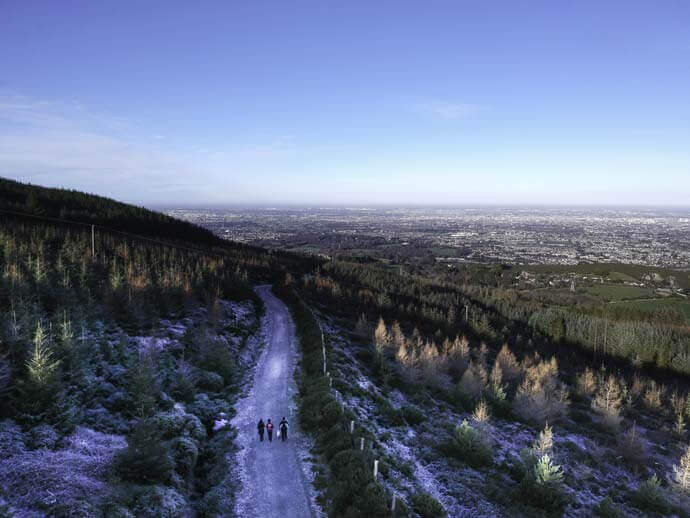 March 17th is a Bank Holiday in Ireland, regardless of what day it falls on. Celebrating St Patrick’s Day in Dublin doesn’t have to involve the crowded streets of the city.

In fact, with so many people heading into Dublin, it’s a good excuse to head out on a ramble. There are endless walks in Dublin to tackle.

From the Howth Cliff Walk and Ticknock to Cruagh Woods and the Dublin Mountains walks, there are few ways better to kick-start your day.

After your ramble, you’ll have earned a pint or three. Now, tourists tend to make the mistake of aiming for one of the pubs in Temple Bar.

Avoid them like the plague. Personally, I’d head somewhere a little outside the city. You’ll find some mighty pubs in nearby Stoneybatter (the Guinness in Ryan’s is the business!).

Nearby Glasnevin is home to the mighty Gravediggers (see above). If you want to stay in the city, around Baggot Street you’ll find Toners and O’Donoghue’s, but keep in mind they’ll get busy.

3. Or avoid the city altogether and visit a seaside town on the DART

The DART provides endless adventure opportunities (see out guide to getting around Dublin). Head south to Dun Laoghaire, Dalkey or Killiney for coastal scenery.

Our push the boat out and head to Bray, when you can climb Bray Head or walk the incredible Bray to Greystones Cliff Walk. A Leap Visitor Card gives you 24 hours travel for just €10.

What to know if you visit for the 2022 St. Patrick’s Day Parade in Dublin 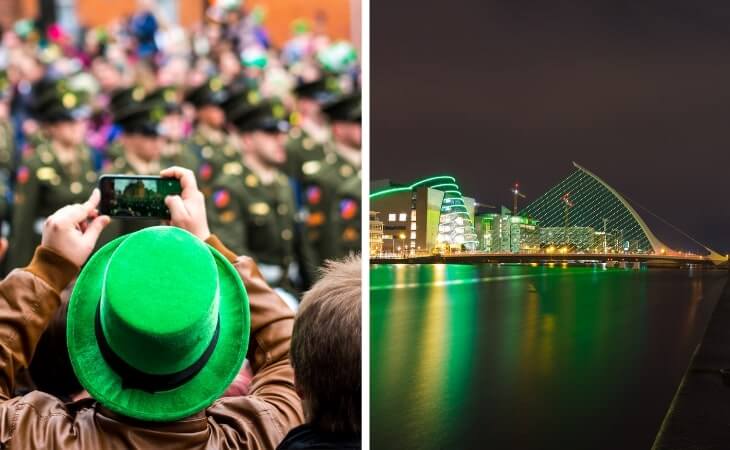 So, if you’re planning your trip around the St. Patrick’s Day Parade in Dublin, there are a few need to knows.

1. It’s yet to be confirmed

Well, we all know the date – March 17th – for the next St. Patrick’s Day Parade in Dublin, however, the 2022 festival is still TBC.

Even if it doesn’t go ahead in 2022, there’s plenty of things to do in Ireland in March that’ll make your trip nice and memorable.

2. If it goes ahead, get accommodation booked in advance

The minute that St Patrick’s Day Parade 2022 is confirmed, you need to secure some accommodation post-haste.

Accommodation in the city is pretty scarce in any year so you need to be organised and get your accommodation booked well ahead of time.

Prices also rise due to demand, so the earlier you book, the better the choice will be. See our guide to the best hotels in Dublin for some inspiration.

3. Leave the car behind

Parking in Dublin is expensive at the best of times and driving into the city on St Patrick’s Day is a nightmare. With much of the city centre roped off and traffic bans in place, there are even fewer places to leave your car.

Make use of local transport including buses, LUAS (Light Rail System) and the DART railway. Alternatively, stay somewhere within walking distance, such as the pretty suburb of Ballsbridge. From there’s it’s an easy walk to the action.

4. Arrive at the city early

The St Patrick’s Day Parade starts at noon but people start claiming their spot much earlier in the day. Plan to get to the route (see “big parade” info above) by 9am and find yourself a good spot to view the passing floats, dancers, bands and rolling exhibits. The parade lasts about two hours.

5. Make a POA for after the parade

If you’re attending the St Patrick’s Day celebrations with family or friends, make a plan of action (POA) for meeting up somewhere after the event in case you get separated in the crowd.

It’s also worth leaving the parade a bit early to avoid the mass exodus. By planning ahead you can manage the situation and enjoy your own socialising at a pre-arranged rendezvous point.

We’ve had a lot of questions over the years asking about everything from ‘Where does the St. Patrick’s Day Parade in Dublin go?’ to ‘Is it better to just avoid the city?’.

Yes. On March 17th, the city hosts the St. Patrick’s Day Parade and thousands gather to see it go past. People wear green and many pubs do live music.

Is St. Patrick’s Day Parade in Dublin all it’s cracked up to be?

From a local perspective, I’d say it isn’t. However, if you’re visit Dublin on March 17th and love crowds and parades, you won’t be disappointed.