The Dingle Peninsula vs Ring Of Kerry question is one that we get hit with a lot.

And, although I’ve driven both 5 or 6 times, it’s a question that doesn’t have one straight answer. Both offer something completely different.

In this guide, I’m going to compare both for you in an attempt to help you come to the decision as to which will suit you the most.

A quick comparison of the Dingle Peninsula vs Ring Of Kerry 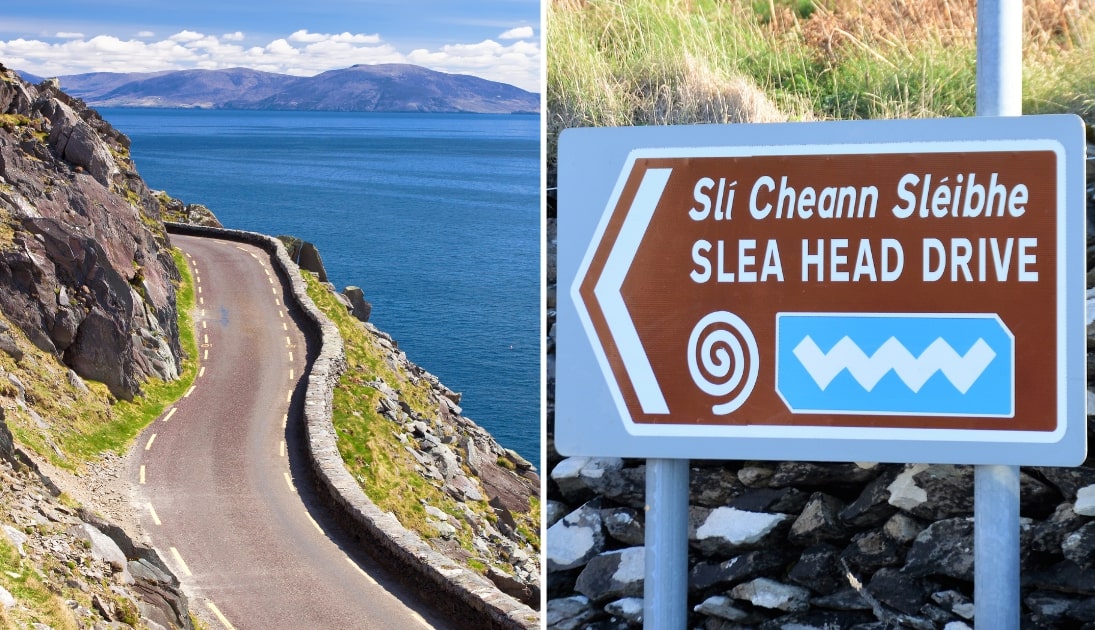 Take 20 seconds to read the points below as they’ll get you up-to-speed quickly on the differences between the two:

The Ring of Kerry Drive takes you around the Iveragh Peninsula (see map below) while the Dingle Peninsula is the peninsula that sits just above it.

Dingle’s main attractions are the likes of Conor Pass, the Slea Head Drive, Dunquin Pier and Dunmore Head while the Ring of Kerry boasts everything from Killarney National Park and Torc Mountain to Ladies View. We’ll list out the main attractions later in this guide.

If you’re visiting the Dingle Peninsula, the best place to stay, in our opinion, is Dingle Town. For the Ring of Kerry, you’ve endless options. The two most popular towns are Killarney and Kenmare. However, there’s also Sneem, Caherdaniel, Waterville, Caherciveen, Kells, Glenbeigh, Killorglin and Beaufort.

4. How much time you need for each

Ideally, the more time you have the better. However, if you’re stuck for time, you’ll want to allocate a day to the Ring of Kerry and a day to the Dingle Peninsula. Ideally you’ll want double that amount of time for both.

Having explored both areas on 5 or 6 occasions, I still find this a difficult question to answer. I love both areas but the one key difference between the two is that there’s considerably more things to do in and around the Ring of Kerry vs the Dingle Peninsula. So, if I had to choose, I’d opt for the Ring.

The map above outlines where both the Dingle Peninsula (purple) and the Ring (orange) are located.

As you can see, both are reasonably close together, so it’s very doable to get between them if you’re staying in the likes of Killarney or Killorglin.

Here are some of the main comparisons between the two to help you decided between the Ring of Kerry or Dingle. 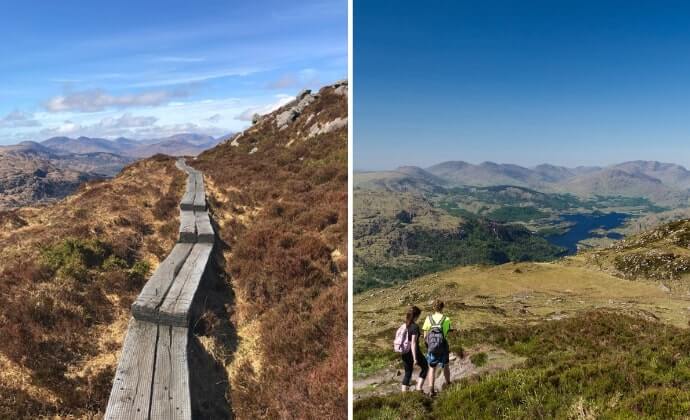 The biggest difference between the Dingle Peninsula vs Ring Of Kerry is the number of attractions on offer. While there’s plenty to do around Dingle, there’s far more things to see and do around the Ring.

There’s endless things to see along the Ring of Kerry, including:

Don’t get me wrong – there’s still plenty of things to do in Dingle! Here are some of the most notable attractions: 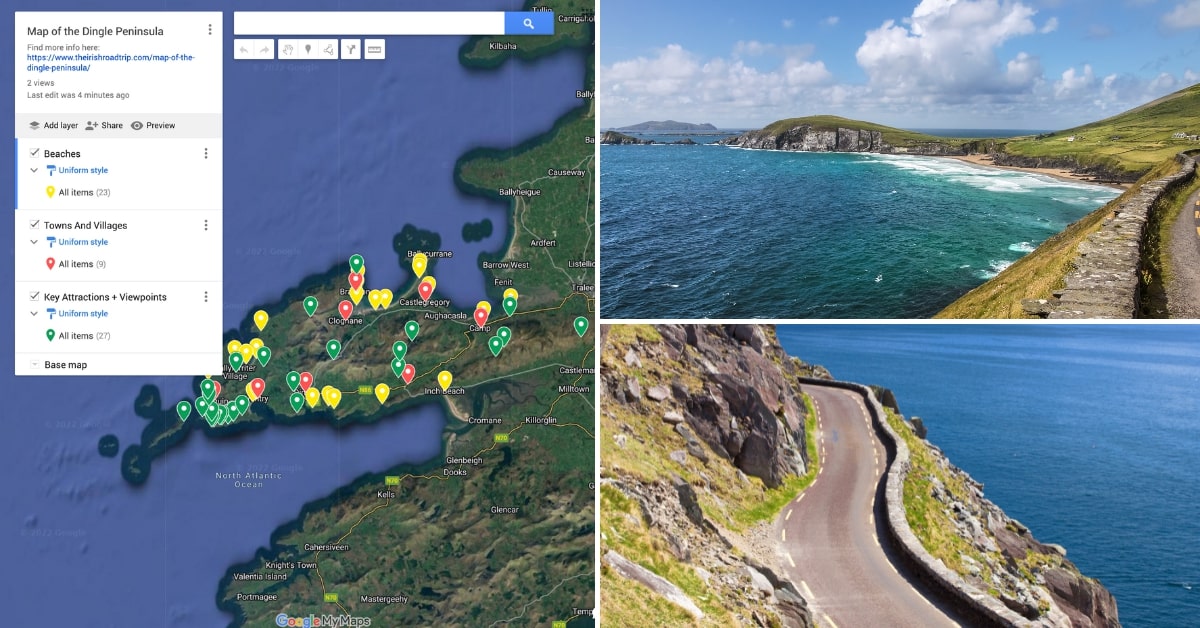 Around the Ring, you have everything from Cardiac Hill and Tomies Wood to the Killarney National Park walks, Carrauntoohil, the Gap of Dunloe and much more. 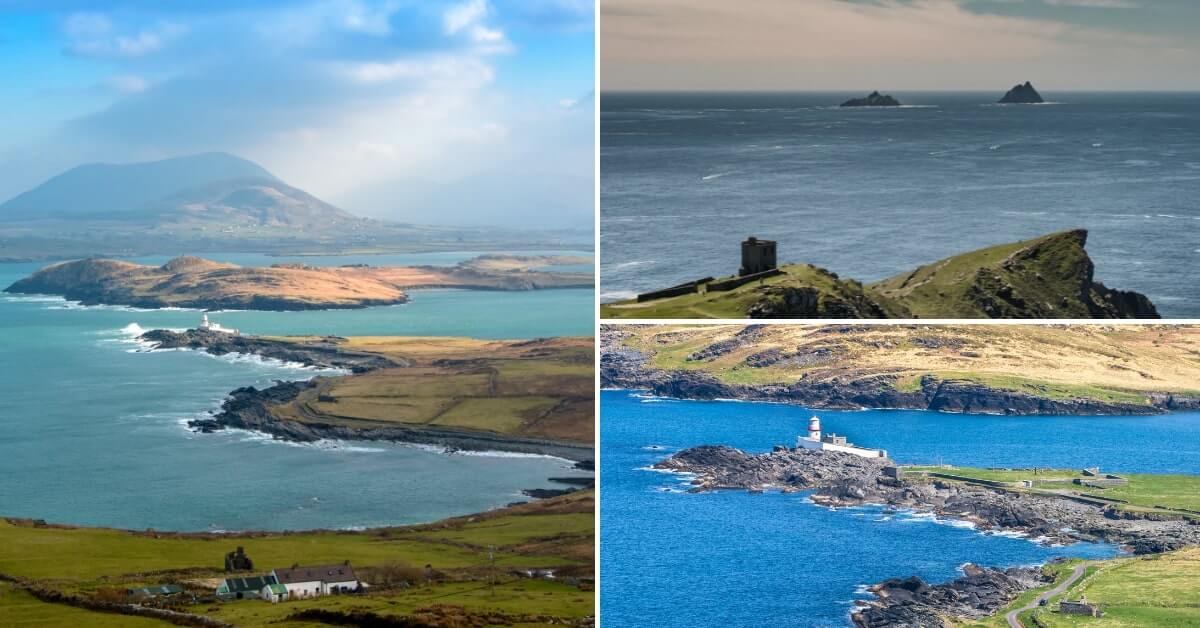 The main ‘base’ people tend to use to explore the Dingle Peninsula from is Dingle Town. There are other towns and villages on the peninsula, like Dunquin, Ventry and Castlegregory, but the main town is a great, buzzy base to explore from.

For the Ring of Kerry, the options are endless. If you want to be amongst the hustle and bustle, stay in Killarney. For a slightly less touristy vibe, opt for Kenmare. If you fancy a quieter experience, Sneem or Waterville are great options.

4. How long each takes to explore 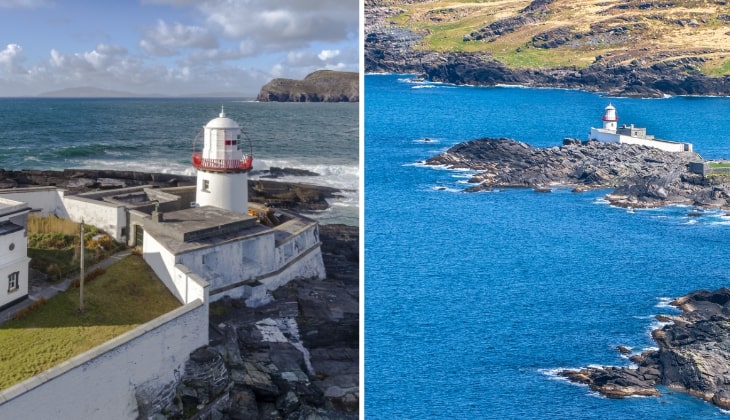 The Ring of Kerry route is 179km (111 miles) in length and you’ll need a day to tackle it. There’s heaps of stops along the way and a day really only scratches the surface.

You can also extend this route slightly to include the Skellig Ring, which takes in the outstanding Valentia Island (and Skellig Michael).

If you were to drive all the way around the Dingle Peninsula without stopping, it’d take you around 3 and a half hours.

How to decide between the Ring of Kerry or Dingle 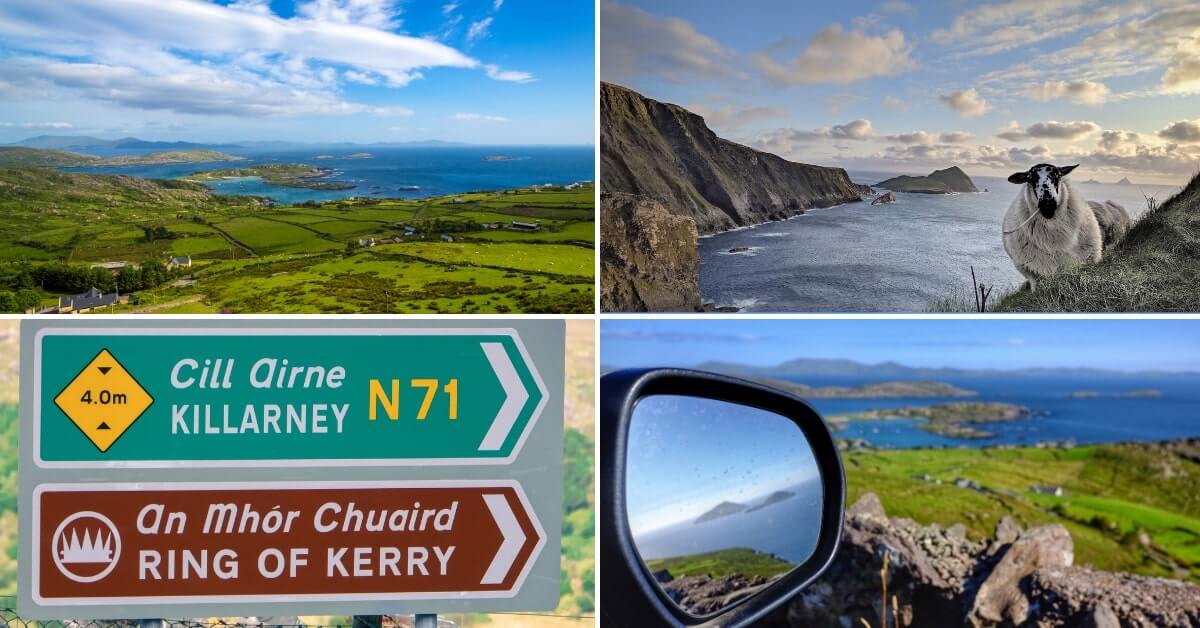 So, there’s no right answer to, ‘Which is better, the Dingle Peninsula vs Ring Of Kerry’. However, we’d like you to be able to come to a decision that you’re happy with and confident in.

Here are several questions to ask yourself that should help you move closer to a decision.

Hop into our guide of the best things to do in Kerry and take note of the places you really want to see. Then open up our map of Kerry and see where the majority of these places are grouped. This is a quick and easy way to decide between the Ring of Kerry or Dingle.

2. Which works best with my route?

Have a look at your Ireland itinerary. Based on the route you’re taking, does the Ring of Kerry or Dingle make life easier for you? There’s

3. Will squeezing both in result in stress/a half ar*ed approach?

It can be tempting to try and do both. Is it always worth it? No! Depending on how much time you have on hand, you’re often better off just picking one and then exploring it slowly and seeing everything there is to see at a more relaxed pace.

FAQs about the Dingle Peninsula vs Ring Of Kerry

We’ve had a lot of questions over the years asking about everything from ‘Can you do both in a day?’ to ‘Which is the most scenic?’.

Which is better Dingle Peninsula or Ring of Kerry?

Both are popular road-trip-routes and, although both have plenty going for them, we tend to lean towards the Ring of Kerry, as there’s more to do along the route.

Can you drive the Ring of Kerry and the Dingle Peninsula in one day?

Yes. It takes roughly 6 hours non-stop, so you’d need at least twice that. However, it would be extremely rushed and you wouldn’t get to stop-off and see many of the attractions.